The home court advantage in high school basketball is intensified more than at any other level.  I never set out to see as many high school and college basketball arenas as I have, but it happened.  I've moved a lot in life, searching for my place.   I've officiated at high school gyms in Washington, Colorado, Wyoming, Idaho, Utah, and Oregon.   Primarily, Washington, Utah and Wyoming, so most of my commentary on those gyms and those atmosphere's is from those states.  A high school gym on Friday night, more than anything is an "atmosphere".   There can be a band, there can be music, there are cheerleaders, there are fans, there is a dimension and depth that isn't found on a flat screen television (thank god).  It's not found at an NBA arena, not even at the college level.  The high school arena/gym is special because of its purity.


First, are the best high school mascots (this is a huge factor for any great home court).
Schools listed just because of their school mascots:   Camas, Washington (The Papermakers enough said), 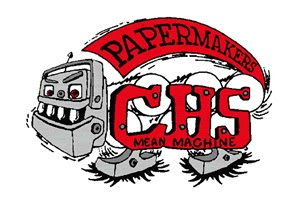 The papermill started in Camas, Washington in 1883.   The "Mean Machine" followed shortly thereafter. 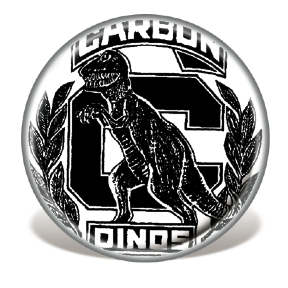 
Orofino, Idaho (Orofino Maniacs), Orofino is the home to the Idaho State Mental Hospital (that is easily the best nickname in high school sports).  I've never actually been to a game here, but the name deserves mention. 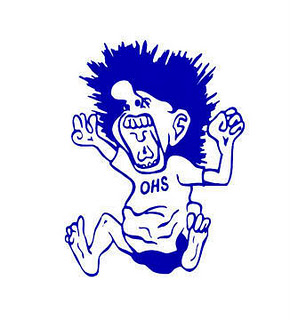 Also on this list without logos pictured are Astoria, Oregon (The Fighting Fisherman), Richland, Washington (The Bombers), Poca, West Virginia (the Poca Dots).

Certain venues stand out above the rest.   The top 10 high school environments that I have had the privilege of being a  part of follow (and yes this is extremely objective):

Honorable Mention because of the gym:   East High School, Salt Lake City, Utah, the Utah Jazz first moved to Salt Lake and had practice here.  Albin, Wyoming, so small it can't be legal.  Wyoming Indian High School, Ethete, Wyoming, I don't go for the new gyms, but this is a over the top with size and how nice it is.  Bingham High School, South Jordan, Utah, "The Minepit", Viewmont High School, Layton, Utah.

10.  Ridgefield, Washington --  Another school on the list primarily because of it's mascot.  A small 2A school in Southwest Washington.   The Spudders as they are called actually features somebody dressed up as a potato as a mascot.  An actual Spud! 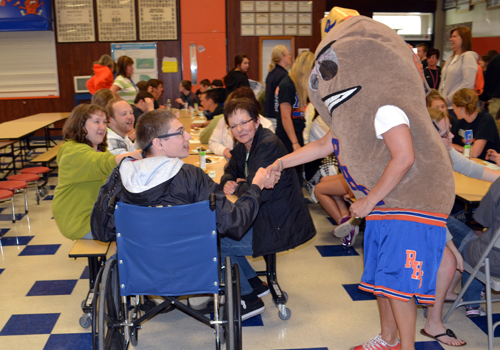 Spudder shaking hands with a student!  You really can't focus much on the game when you see this guy in the corner.


9.  West Jordan, Utah -- Kind of the classic large, old Utah school.  There is a lot of tradition here and West Jo annually hosts an alumni tournament for former players that can't let go.

8.  Little Snake River, Wyoming -- "The Snake Pit", was just as packed percentage wise as the Battleground gym with maybe 1/50th of the people, but a classic small town gym with a parquet floor, a stage behind one basket and legendary coach Ed Reed's name emblazoned across it.

6.  Storey Gym, Cheyenne, Wyoming -- a large Indiana type facility, old but refurbished.   Central vs. East brings out most of the city.  It almost feels like a small college gym it is so cavernous.  Central has won the second most state Championships of any high school in the country and they all started right here.

5.   Chugwater, Wyoming -- Actual cheer, "C-H-U-G-H-2-O", "C-H-U-G-H-2-O" "Chugwater, Chugwater, go, go, go . . ."   I never get enough of that.  Plus they serve the famous "Chugwater Chili" at the Little Six tournament which annually features the six smallest schools in the smallest state in the country over one weekend.  What high school basketball was supposed to be about.

4.    Hudson Bay High School, Vancouver, Washington -- It's just this enormous facility.  The largest high school facility that I have been in.  I'm not sure how anyone can actually see the game from the last rows as there are stanchions and what seems like a 100 rows between the court and top row.

3.    Battleground, Washington -- I have never seen a high school basketball game with as many people in attendance as the Battleground/Prairie rivalry.  5000 people, at least that's what the occupancy of the gym was and the entire thing was filled.  Vancouver, Washington is basically a suburb or Portland, yet these schools somehow maintain their country roots when the teams meet.

2.   Olympus High School, Salt Lake City, Utah -- The Olympus student body is knowledgeable, fun and does that bit where some kid comes down in a robe and parts the student body.  I think it's Zeus.  It's as creative as anything a college is doing.   Just electric on Friday night.

1.   Judge Memorial Catholic High School -- the court is decidedly smaller than a regular court.   How small I'm not certain, I didn't measure.  84 is the minimum length of a high school basketball court -- this seems smaller.  The band is jammed in a corner and the Judge student body, administration and support group sits right on top of the court.  There are only eight rows and three rows on each side of the court.  You really can't hear anything on a Friday night.
Posted by Editor at 8:23 PM