I have not posted on this site in some time.  I try to balance my winter schedule with work and other events, however this year I have been particularly busy with my second "career".  On most Friday nights and Saturdays I am also a high school basketball official.  It pays a little money and I really enjoy the comraderie with the other officials.  Additionally, officiating keeps me close to the game that I love.  Unfortunately, it limits the time I am able to spend writing here.  Often I don't get home until after 11 pm on Friday night and my Saturdays are usually spent waking up early and heading off down the road to another high school for games that day.   It takes me away from the writing I enjoy here.  I have never touched on the high school game on this site.  But the story in Snake River is becoming impossible to ignore.  It is the stuff Sports Illustrated should be covering.

This year was the first year I had ever had the privilege of going to Baggs,Wyoming.  What makes Baggs, Wyoming special is that it is precisely everything that the NBA and college game aren't.   There aren't million dollar contacts, coaches don't get bought out with hundreds of thousands of dollars.  The players don't transfer at their first moment of dissatisfaction with the program.  Their coach is also a preacher at the local church.  Think of Hickory, Indiana only a modern version.

Little Snake River High School is in Baggs, Wyoming.  It's enrollment is only 60 kids, but it's boys and girls basketball teams are perhaps the best in the state.  (Maybe at any level)  Record wise it's high school boys and girls basketball teams are as good as any in the entire country.  Combined, entering this weekend (their state tournament) the squads are a combined 50-0.  A year ago the boys captured the State Championship while only losing once.  The current senior boys have won 33 consecutive home games, they have never lost in "The Snake Pit".  Their last home loss was against Encampment, before any of the seniors on this team had even entered high school
Baggs couldn't be more isolated.  It's two hours from Rock Springs and two hours from Laramie, Wyoming.  Four hours from Denver, Colorado.  To get there you drive along the most isolated part of I-80 take a right and drive 50 more miles.   If you blink you might miss the town and end up in Colorado.

But the Little Snake River Rattlers are a magic act.  They don't lose.  "The Snake Pit" as their home court is called is always and their fans are always decked out in purple.   Their are only four rows of bleachers on each side of the court, but every time I have been to "the Snake Pit" it has been packed -- the entire community turning out.   Up until only last year the gym still featured the fan shaped backboards at it's respective ends.  Some locals were upset that they were taken away.   Of course as one fan told me, "we haven't lost with the new backboards."

A couple of weeks ago I also officiated in Baggs and for their games against Cokeville there was a small smattering of media attention as the Cokeville girls represented what was likely the Rattler girls best chance at a loss this year.  A WyoPreps reporter and somebody from the Rawlins Times made the trip down.  It didn't happen as the Rattler's pulled away in the second half.

Just like Lute and Bobbi Olson Court or John Wooden Court at the University of Arizona and UCLA respectively, Little Snake River named it's court after it's legendary coach -- Ed Reed.   Ed Reed Court is only an 84 foot court (see below), but the legenday coach spent 33 years coaching the Rattlers he won 465 games during his career and lost only 138.  His son Dale averaged 40 points per game as a senior and attended both the University of Iowa and Washington State University on a basketball scholarship.   I am told that Dale now coaches a top high school team in the Houston, Texas area.   Ed's photo is posted outside of the court named after him and he is in the Wyoming High School Hall of Fame.  An expert parent tells me that Ed occasionally attends Rattler road games closer to Wray, Colorado where he now makes his home.

Is there another program in the country that can boast of both an undefeated boys and girls program?  I have not heard of one.  Each squad played an impressive nonconference schedule featuring almost exclusively Colorado High Schools.  They each won them all.  The boys team knocked off a top 10 2A Colorado team in Meeker, Colorado.  The girls have not been challenged this season either.   A fan tells me that Rawlins (a 3A school) in Carbon County won't play either the boys or the girls.

In fact, the girls team has so much interest, that several girls don't even get to suit up.  A handful of them don't get to play jayvee (there is no jayvee girls game at the 1A level) and there are too many players for the varsity team.  They are forced to sit in dress clothes and watch as their undefeated colleagues and classmates continue their assault on Wyoming High School basketball.

Before the games I officiate, I am given a tour of the school by one of the players.  He points out a display featuring a venomous rattlesnake with it's fangs protruding out.  An impressive reptile.   He tells me the story of how it ended up outside of the gym, "My daddy killed that snake -- with a rope," he says.    I am baffled by this?  How could anyone kill a snake with a rope?  Only in Wyoming, only in Little Snake River.  (The picture is below).

At the captains meeting, I boldly announce that "there is not another place I would rather be on a Saturday afternoon. -- Not at an NBA game, not at any college game."  All the players seem confused by this as if there is something wrong with me.  But I know how special this is,  how the moments that these players are experiencing CANNOT be dupliated anywhere else in the country.  No other college or high school that I know of can boast of two undefeated teams.   It is a special environment.

The Rattlers win both of their games on the day I ref (against Encampment) as they always do.  My guess is that they will end up undefeated and win a pair of state championships this weekend in Casper, Wyoming.

As of this writing, the Snake River girls advanced to the 1A title game after defeating Farson. 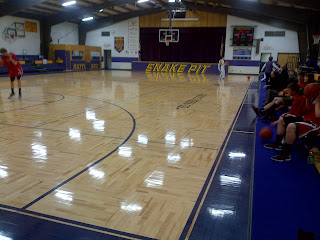 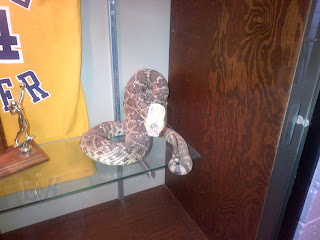 Email ThisBlogThis!Share to TwitterShare to FacebookShare to Pinterest
Labels: Rattler -- Killed with a rope